In Lexington, the University of Kentucky’s extraordinary Opera Program has for the last 25+ years staged an extraordinary event; “It’s a Grand Night for Singing”. Over a thousand people a night for two weeks assemble to hear remarkable voices sing Broadway/Hollywood/Billboard tunes. It’s supported by an orchestra and choreographed by a team of Broadway-seasoned professionals. It’s a startling evening. You just don’t 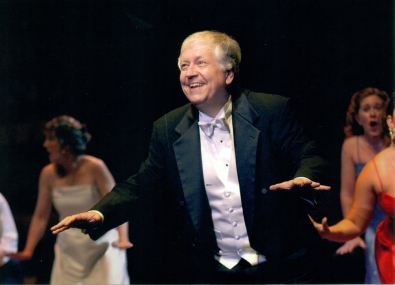 expect this level of performance, energy, and talent from a basketball school. It’s a great tribute to Dr. Everett McCorvey who conceived the idea and has nurtured it through two-and-a-half decades and a couple of generations of participants.

I have been fortunate to have been a participant in this event a number of times. In fact, I think I may hold the record for having the most numbers cut from “Grand Night”. Hey, the standard’s high.

My friend, Dr. Tedrin Lindsay, has been a featured performer in this event for 20+ years. His piano-playing is energetic and passionate, yes. But he is also a man of great imagination and this shines forth in his performances. This is what live performance is about.

Tedrin has posted some of his remembrances of “Grand Night” moments.

May I indulge in one myself?

For the third year of “Grand Night”, Everett asked me to be part of a quartet of singers to sing a medley from “Kismet”; And This is My Beloved/Baubles, Bangles and Beads. I had never met my fellow singers until I arrived at the first rehearsal for the number in Everett’s old studio, the studio that was so tiny it was 80% piano. We crowded in; Everett, Cliff Jackson at the piano, and singers Angelique Clay (soprano), Phumzile Sojola (tenor), and a young bass from Louisville whose name evades my geezer memory.

We rehearsed for about an hour. My fellow singers didn’t sing to me, they sang through me. I had never heard so much sound in my life. You could see the sound in that little room. After the rehearsal, I crossed the street to the Medical Center for an MRI to confirm that all my major organs were intact and in their proper places.

I was in heaven.

I was singing these stunningly beautiful songs with these crazy talented singers in front of an orchestra for a thousand people a night……in a tux.

After the show, I asked my wife if she liked the number. She replied; “Were you in that one?”

I watched one of my favorite films, Day for Night, with a small group of folks who are devoted to cinema. I have a special fondness for films about films. Cinema Paradiso, The Stuntman, Sunset Boulevard, Singing in the Rain, Once Upon a Time in Hollywood, and their ilk always bring my remote to a delighted halt when I happen upon them.

Day for Night holds other charms for me as well. The film crew portrayed in the movie is a tight-knit one. They’ve worked together before and are familiar with and tolerant of their teammates’ peccadilloes. Their chosen location for shooting is a sunny and warm one (even when they make it snow). The film has a summer camp feel about it. I’m from the Spin & Marty generation – summer camp usually works for me unless there’s a slasher wandering about.

The film features a tour de force performance by Valentina Cortese and a “tour de WOW” appearance by Jacqueline Bisset.

When the film concluded for tonight’s viewing, one of the group commented; “I can see why people love this film, but it’s not a great work of art.”

After we mopped up the blood and I pleaded justifiable homicide and made bail, I got to thinkin’…

He’s right. It’s not a “great” work of art, but if you generally cherish the films of Francois Truffault (and I do) it is a “great” work of Truffault. Now…what does that mean? This is one of our most-revered directors! How can his films not be great?

“Greatness” is not the story Truffault cares to tell.

For me, the charm and the wonder of Truffault resides in the tight slice of humanity in which he chooses to tell his stories. His are not the stories of saints or demons. His characters do wicked things and heartbreakingly kind things to each other and are not predictable in their choice between the two. They do good things, but not great, and they do them when it’s convenient, and or when it happens to occur to them. Ditto for the not-so-good things they do. Truffault’s characters tell the truth when they know what the truth is or when it’s not inconvenient to do so.

Truffault’s stories tell us about cats that can’t follow instructions, persistent human creativity in the face of American insurance companies, fidelity unless Jacqueline Bisset or Delphine Seyrig or Catherine Deneuve or Jeanne Moreau is involved…and of course, when fidelity is convenient. He tells us of dalliances that turn into life-destroying obsessions or deserted island fantasies or small-scale, but convoluted revenge/murder schemes (that may or may not work) – no great tragedies, merely intriguing human ones.

I find that precious, and usually convenient.

The first house I bought in Lexington was a block away from Castlewood Park in the 1980’s. This neighborhood was home to me. I grew up off Meadow Lane, played Little League baseball and basketball in Castlewood Park. The basketball court then was in the Louden Castle, now home to the Lexington Art League.

In the eighties, I was doing a lot of summer theatre in Woodland Park, and with Dr. Jim Rodgers at UK…and I was bicycling to rehearsal many nights. Pedaling through these Northside streets also felt like home. Growing up, my friends and I biked everywhere and all the time. There were long summer days when we were up and rolling by 8am and still rolling strong at 10pm. Our parents didn’t worry about it since all the parents on the street kept half an eye on all the kids. Every kid’s house was a refuge from weather, hunger, or the calls of nature.

We were excellently-equipped to face our world. We had baseball cards flapping and snapping on the spokes of our wheels, and when the sun went down we had soft drink cans. We had perfected the technique of stomping on the middle of empty cans in such a way that as the can was crushed, it curled around and clung to the sole of our sneaker. Thus shod, we would mount our bikes, attain the speed of light, and drop the lethal sneaker to the asphalt. The night would come alive with streaks of sparks and screams of burning metal…followed instantly by the wails of the neighbors.

Clearly, the offended neighbors were unaware that America was great then.

So…there I was in the 80’s, twenty years older, back in the neighborhood, biking those streets again.

Now though, I was biking alone at night and no one was watching or listening. They were self-sequestered in their air-conditioned nests with cable TV. The streets were silent. I was invisible. How cool is that?

However, part of my ride to rehearsal each night would take me through what I came to refer to as the “NACZ” – the no air-conditioning zone. The difference was stark. In the NACZ I was not invisible, I was a participant once more. People sitting on their porches would greet me. I could hear their conversations. The windows were open. I could hear their phones ringing and could hear what was on TV. I loved it. On those “dark, warm, narcotic American nights” (thank you forever for that description, Tom Waits) I once again became a ten-year-old Prometheus on a 5-speed with a beverage can clamped to my sneaker ready to leave a trail of sparks and screeches and devastation to the dismay of my parents and neighbors out on their porches.

Of course I didn’t actually do that now.

I was a responsible adult now…

…riding a bike to a place where I would spend the evening pretending to be King Arthur, or Don Quixote, or a murderous barber, or a pleasant man with an invisible bunny for a drinking buddy.

Also, my mom had thrown all my baseball cards away.

I watched Ingmar Bergman’s film; SUMMER WITH MONICA. The rest of you probably watched it in 1956 or 66 or 76 or 86 or… What can I say? I’m in a different time zone and moving with my usual glacier-like speed.

This is a lovely film!

against the inevitable realization of what it means to be a rent-paying, child-rearing adult. The resulting sparks in this case are difficult and discouraging, but not unhopeful.

Whoa. Not unhopeful! This is Bergman, right?

I am ambivalent about Bergman. The craftsmanship is evident. The tricks with light and dark are mesmerizing. I am always impressed…and usually bored. The films are tedious. I don’t require a car crash every thirty seconds but I appreciate an occasional pulse.

I know Mr. Bergman was famously influenced by the films of Carl Theodore Dreyer (whom I admire) and you can see this when his camera dwells on the faces of his actors, most especially in WINTER LIGHT. But in Dreyer’s films, JOAN OF ARC as an excellent example, while the actors’ faces are the main tool for telling the story, those faces don’t feel static or tedious. Bergman misses this distinction.

However, SUMMER WITH MONICA seems to never become stationary. Most of the scenes in this film leave you wanting more. How often can you say that about a Bergman film?

I really liked the film and will be thinking about it for a while yet.